Hedi Pope’s apartment at Ardenwoods Retirement Community  is bright and airy and filled with beautiful memorabilia from a fascinating life. She was honored for her successes in her career as well as her volunteer work after she retired. We’ll get to those accomplishments, but first, let’s talk about how she arrived in the United States.

Hedi was born in Vienna in 1920. Her young life was full of family and dance in the beautiful walled Austrian city. She performed at  the Austrian state theater, the Burgtheater, as well as small underground coffeehouse theaters in the city. Many of these were known for their political satire, and particularly for making fun of Hitler.

Hedi remembers the day in 1938 when Germany overtook Austria and her school closed for a week. It re-opened with a new headmaster and she found herself between two friends, one jubilant and the other devastated.

In January 1939 Hedi and her sister secured affidavits from family and other sponsors in the United States. They made their way to New Jersey. By March Hedi found herself rehearsing for the Broadway opening of “From Vienna” performed by The Refugee Artists Group. She found Broadway to be “unbelievably welcoming.” The Music Box playbill introduced the young performers in this way:

We are a group of actors, writers and musicians…. from Vienna… to find a new home in America and on the American stage. In 1933 we started our “KLEINKUNSTBUEHNE” (Little Art Theatre) in Vienna. We were young – we were ambitious and we had faith in the theatre. In our movement were gathered many young artists who believed the theatre to be more than a business venture.

We felt that the catastrophe would come and raised our voices. We hoped satire and pointed ridicule would kill the adversary. But the Dollfuss Government banished us from the legitimate stage. So we were compelled to play in the cellars of coffee-houses before an audience not exceeding 150. The censor couldn’t silence us. We developed a style of our own to say things – and the democratic man in Austria understood us.

Her journey started when she received a scholarship to Miami University in Cincinnati followed by graduate school at Wellesley College, and finally a teaching position at Converse College in Spartanburg, SC. In the years following WWII, Hedi married a US soldier from Boston and they moved to Alexandria, VA and raised two children. It’s here that she made her lasting mark.

Hedi opened a dance studio for young students: CODA, Contemporary Dancers of Alexandria. Her Modern Dance and Ballet studio taught young girls poise, grace, fitness, performing skills, posture, self expression, and fun. Consequently, she traveled with her students to Europe with the aim of offering the children lasting cultural impressions.

Her work with young dancers over many years earned her the affection of the city. In 1976, Alexandria’s mayor wrote:

The City of Alexandria is extremely appreciative of Hedi Pope’s great contributions of experience, time and energy to the cultural life of the community over the past 30 years.

Alexandrians – Great and Small – acknowledge Hedi Pope’s efforts in stimulating children’s interest in the arts through the medium of the dance.

We express the gratitude of the city for her splendid generosity and the superb quality of her work.

Because of  her great work, she went on to receive Washington Performing Arts Society and the Pola Nirenska Award Committee’s 2006 Lifetime Achievement Award. The award emphasizes “Her Vision, Perseverance and Inspiration… as an inspired and demanding teacher whose students have become leading innovators in modern dance.”

Retirement and The Holocaust Museum

Hedi spent her early retirement years in Alexandria, VA, working with The Holocaust Museum. She described her early work with the museum in this way:

When President Carter created the commission in 1978 to build the Holocaust Museum, public opnion – mine included – was somewhat negative about the need for – and interst of the public for telling the story of the Holocaust. It took 15 years until the opening in April 1993, of fantastic efforts of collecting data, photographs, arti-facts, research and funds. The immediate success of the museum put all doubts to rest. About two million people from all over the world visit every year.

I became a volunteer in the fall of 1993. My reason?? I was born and raised in Vienna, Austria, and I was 18 years old when Hitler wiped my homeland off the map, and it became part of Germany.

Hedi shared photos, artifacts, and personal stories with the museum in her retirement before moving to Ardenwoods.

In 2008, she received a very special invitation to her homeland.

We are inviting the people who, beginning in March 1938, were persecuted, humiliated, and driven away from Austria or interned in concentration camps, to visit their old homeland.

A Letter to the Stars included the Invitation Project and Hedi. Consequently, Hedi attended the event, returning to her home city. 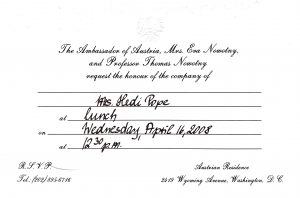 Hedi will turn 98 in March. She’s an active member of the Ardenwoods Community.